Carlos Gamez de Francisco was born in post-revolutionary Cuba in 1987, to a Cuban-Spanish mother and a Cuban-American father. He grew up in Cuba and was educated in an academic style heavily influenced by the Russian Academy.  At age five, he determined, with absolute certainty, that he would be an artist. By the time he was fifteen, Gamez de Francisco was diligently painting 8 hours a day, every day. Today, he often spends 15 hours a day painting and feels “very blessed to do what I love.”

Gamez de Francisco arrived in the United States with $650 at the age of 21 knowing no English. He spent $600 on art supplies and $50 on a pair of Cortez running shoes – “just like the ones Forrest Gump wore to run across the United States.” He committed himself to learn 100 English words every day, studying diligently, working, and painting at night. For the first five months, he lived in America without sleep. His exceptional talent, hard work, and perseverance led him to earn artistic commissions and recognition.

His classical training was based on portraits and history, paintings that Royalty and the very wealthy upper class would commission. Garments were exquisite, surroundings emanating wealth. But Carlos felt that “Everybody has the right to be in the portrait” and he embarked on a series where everyday people were featured with ‘found’ objects in their home, like lace doilies, curtains, plastic bags, and kitchen towels, draped and adorned in such a way they appeared ‘royal’.

His paintings of furniture tend to be over-decorated, a nod perhaps, to that of the wealthy, but maybe more as a result of a childhood memory. In Cuba, his mother saved for two years to purchase a new sofa. It was such a sign of achievement for her that it was kept in plastic and no one was allowed to sit on it. He learned to admire it from a distance as if he were in a museum.

After arriving in the United States, he noticed the lavish attention we devote to our pets, spoiling them and allowing them to lounge on the sofa. This led to a new series: “Keep Your Pets Off Furniture”. This series not only had dogs laying on the sofa but had horses jumping on the elaborately decorated couch. Today, Gamez de Francisco’s Afghan Hound has the run of the house, lounging wherever he likes.

Living in Kentucky, horses are a favorite theme for Gamez de Francisco. In surrealist fashion, he combines horses with the human form, centaur-like, but in reverse – the horse’s head with a human body. Or, maybe the head of a dear, a fox, a giraffe . . . and don’t be surprised if the body is that of a beautiful woman attired in silk and finery. 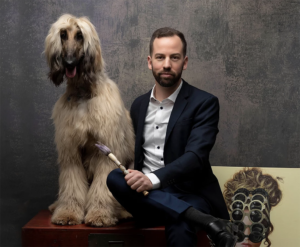